It seems that I haven't posted about bread for a long time on this blog. Well, that's about to change since I'm on a bread making kick. There are too many bread recipes I need to share :). Now that I think about it, this was one of the first recipes I put together back when I started baking. The story is that in high school, my mom used to buy these long loaves of chewy french bread filled with pockets of bacon from a bakery at a local mall. I loved that it could be easily pulled apart into individual servings. My family always referred to it as "bacon bread". Eventually though, the bakery went out of business and we had no more bacon bread. A few years later, when I finally took up baking, I thought back to the bread and realized that it was going to be difficult to find a recipe since I had no idea what it was called. But I figured the recipe wouldn't be too hard to recreate, just a baguette recipe with some bacon. After a bit of research, I finally discovered that this is referred to as "pain d'epi". An "epi" is an ear of wheat, which is what the shape is supposed to resemble. This bread recipe is one of my go-to recipes because it's not too difficult and it isn't that time consuming (relatively speaking for bread making), and of course, it's delicious. 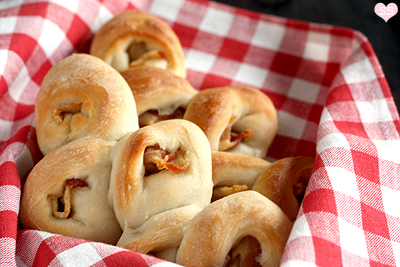 Boil a pot of water. Once the water is boiling, drop the bacon slices in and boil them for 5 minutes. Remove the slices, let them cool on a paper towel covered plate, and set aside for now. The boiling is optional, but it reduces greasiness and saltiness in the final product.

Microwave one cup of water for about 15 seconds, so the water is warm, but not hot enough to burn your finger. Add the sugar and yeast, stir, and then let it sit for 10 minutes, until the yeast has proofed and the top of the mixture is foamy. In a mixing bowl, mix 4 cups flour and the salt. Pour in the proofed yeast mixture and the other cup of warm water. Mix. If the dough is very sticky, add in another cup of flour, 1/4 cup at a time until it is less sticky.

Once the dough comes together, knead it for about 10 minutes. Then place it back in the mixing bowl, cover the bowl with plastic wrap, and let it rise for about 1 hour, until doubled in volume. Once doubled, punch the air out of the dough and divide it into 6 pieces. Take one ball of dough for now and keep the other five covered. 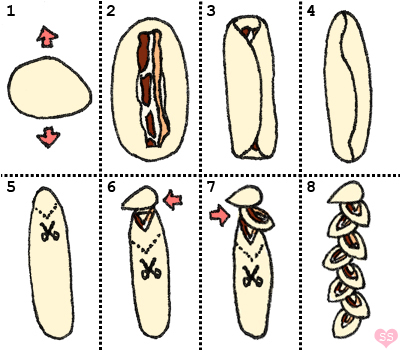 1) Take one of the six dough balls and roll it out on a flat surface so it's longer and wider than a slice of bacon
2) Place a slice of bacon in the center of the dough
3) Fold the dough over the bacon
4) Pinch the dough to seal it and place it seam side down on a parchment lined baking sheet
5) Take kitchen shears and snip a "V" into the dough, cutting all the way through the bacon, but not all the way through the dough
6) Push the cut dough to the left and cut another "V" lower down
7) Push the cut dough to the right and cut another "V" lower down
8) Repeat steps 6 and 7 until you reach the end of the dough and then repeat all the steps with the other 5 pieces of dough

After shaping the dough, let the loaves rise on the baking sheets for another hour. Preheat the oven to 450°F. Fill an oven proof bowl with water and place it in the oven. Place your baking sheet next to the bowl and bake the loaves for 10 minutes. Then lower the temperature to 400°F and bake for 5-10 minutes more, until the loaves are golden brown and they sound hollow when you tap them. Let the loaves cool on the tray for 10 minutes, then move to a wire rack to finish cooling.